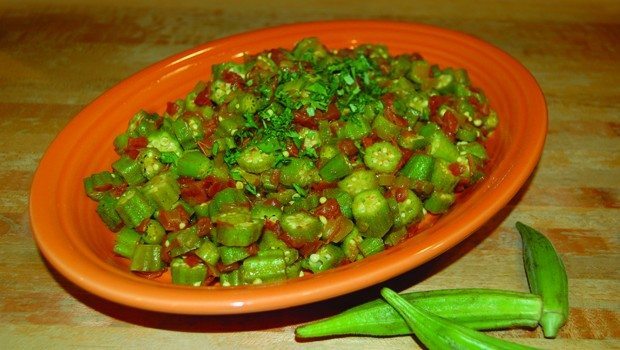 “We are now seeing 20 percent non-Indian customers in our store,” says Vipul Patel, owner of the Louisville, Kentucky, branch of Patel Brothers, the largest Indian U.S. grocery store chain. “Usually, new customers come in with an Indian recipe and we help them find the ingredients.”

Vegetarianism has been a way of life in India for millennia. Some Indian vegetables may already seem familiar; winter melon, or white pumpkin, for example, is a squash that cooks and tastes like its orange counterpart. Eggplants native to India are egg-shaped and smaller than the American variety; they cook in less time and have a less bitter taste.

Other popular Indian vegetables, such as okra seedpods (eaten as a curried entrée or side dish and also used to thicken stews and soups), fenugreek leaves and aromatic seeds from the pea family have become common American crops. Tindura, a gourd used in curry, and daikon, often eaten raw in salads or seasoned as stuffing in flatbread is relatively new here.

“By eating a larger variety of vegetables, consumers benefit from an increased array of vital nutrients and specialized phytochemicals that have healing and medicinal qualities,” says Ronald Hubbs, a practitioner at NW Naturopathic Medicine, in Portland, Oregon. He advises against overcooking vegetables to maintain their nutritional qualities.

Hubbs notes that bitter gourd is probably one of the most underappreciated Western foods, yet studies on mice sponsored by the Garvan Institute of Medical Research, in Sydney, Australia, and the Chinese government show that it contains four compounds that are effective in reducing blood glucose levels in diabetic patients.

Also consider pickled vegetables, known as achar. “Naturally fermenting vegetables can turn some of them into superfoods, with enhanced properties that are rich in healthy bacteria and support digestion and immunity,” adds Hubbs, citing studies in the Journal of Nutrition and Clinical Microbiology Reviews.

Daals, or lentils, including Indian diet staples peas and beans, provide a good source of protein that is also high in fiber, says Hubbs. Lentils—highly versatile and available with or without the skin, whole or split—can be eaten thick and creamy, soup-like or dry, cooked with other vegetables or simply enhanced with basic Indian spices. Popular legumes include black-eyed beans and garbanzo beans. Different regions in the Indian subcontinent have their preferred daal species and cooking methods, but all often serve them with boiled rice or Indian bread, called chapatti.

Although often considered “hot”, the blend of aromatic herbs and spices used in many Indian dishes, including those incorporating dairy, can layer in tantalizing flavors without necessitating frequent water breaks.

Recently, researchers at Penn State University found that antioxidant spices such as turmeric, oregano, cinnamon, cloves and paprika reduced triglycerides in the blood by 30 percent, helping to reduce the risk of chronic disease. “That’s because adding spices to a meal decreases the amount of fat in the bloodstream after eating,” explains study leader Ann Skulas-Ray, Ph.D. “There are clear benefits to adding spices to your meal, even if you’re only adding them occasionally.”

Sprinkling a little turmeric and ginger on legumes or other vegetables while boiling or sautéing them can create a palate-pleasing dish with health benefits. Numerous studies, including those from the University of Michigan and the University of Minnesota, show that these ingredients may help fight several kinds of cancer, reduce inflammation and relieve arthritis pain, among other benefits.

Americans can easily learn to bring out the best of their own Indian cuisine with the subcontinent’s alluring blends of herbs and spices delivering both unforgettable flavor and nutrient-rich fare.

Bushra Bajwa is a freelance writer in Issaquah, WA. Connect at BushraBajwa@hotmail.com.

Authentic garam masala is made with whole spices that have been roasted and ground, but this quick and easy substitute will add a warm, sweet flavor to vegetables, rice and other foods.

Mix the spices in a small bowl, place in an airtight container and store in a cool, dry place. 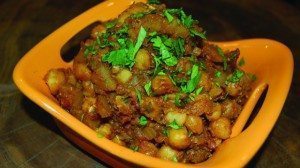 Add chickpeas, potatoes, tomatoes, salt and garam masala to saucepan and bring to a boil.

Add baking soda and water, and then simmer for 7 to 8 minutes or until potatoes are tender.

Heat oil in a 2-quart saucepan to lightly brown the onions.

Add tomatoes and cook on medium heat for 5 to 6 minutes, covered.

Add the okra, mix well and simmer for another 8 to 10 minutes.

Wash daal and soak in warm water for 1 hour.

Add ginger and garlic, spices and tomatoes and stir for a few minutes to make a paste.

Add lentils and water, and then bring to boil.

Simmer on low to medium heat for 30 minutes.

Cut in half lengthways and remove the seeds.

Slice the halves into ¼-inch pieces.

Rub salt into the pieces and set aside for 20 to 30 minutes (to remove the bitterness).

Rinse out the salt and dry the bitter gourd.

Heat oil in saucepan and then add bitter gourd, turmeric and salt.

Sauté on medium heat for 3 to 4 minutes.

Add onions and sauté for another 5 minutes.

Add tomatoes, mix well and cook on medium heat for another 5 minutes.