he Ramsey Public Library will be offering a free acupuncture session with Monika Gajiwala at 7 p.m., May 19, in Ramsey. Gajiwala […

ongregation B’nai Israel, in Emerson, welcomes the joy and peace of Shabbat with songs, prayers, and an intergenerational drumming circle from [… 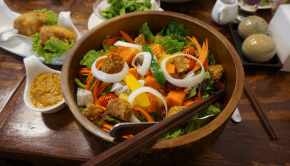 You Can Heal Yourself, Dammit

ast December, I developed a number of micro-lesions and one larger lesion in my digestive tract, among other health issues. […

Practical Ways We Can Help Out the Planet LISA KIVIRIST AND JOHN IVANKO or many Americans, living more sustainably has […

Old-Fashioned Fruits and Veggies Return to the Table AVERY MACK Of the 7,500 varieties of apples in the world, 2,500 […

A Greener Shade of Youth

In the 21st century, I think the heroes will be the people who will improve the quality of life, fight […

Marie Kondo on the Joy of Tidying Up

They Like Short, Social and Fun Workouts DEREK FLANZRAICH illennials are a big deal. Most businesses view them as trendsetters […