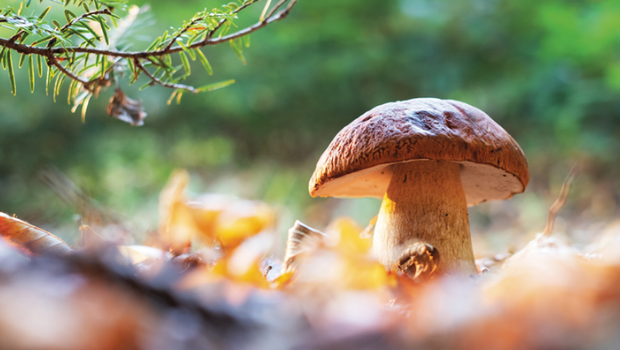 Wild mushrooms can infuse exciting new flavors and textures into familiar dishes, along with a taste of the local terroir, the natural habitat, from woods to plate.

“I first encountered wild mushrooms through local foragers, then later from specialty food purveyors who would fly mushrooms from around the world into our kitchen. They were the most unique ingredients I could find, offering colors, flavors and textures I had never experienced … pure catnip for a chef,” says Alan Bergo, a Minnesota chef and author of The Forager Chef’s Book of Flora. Recipes at Forager Chef feature more than 60 species of wild edible fungi, from common deer mushrooms to prized porcinis.

The intriguing flavors of wild mushrooms in part come from their diets, akin to the difference between grain- and grass-fed meats. “For fungi, their food is their habitat. Cultivated mushrooms have less variety of the micronutrients and secondary metabolites that can add flavor to a wild mushroom,” says Eugenia Bone, a New York City food journalist and editor of Fantastic Fungi: The Community Cookbook.

Foraged fungi also offer a host of nutritional benefits surpassing commercially grown mushrooms. Wild mushrooms like chanterelles and morels can contain up to 1,200 international units (IU) of vitamin D per serving, whereas commercial mushrooms, typically grown in dark conditions, contain less than 40 IU, according to the Harvard School of Public Health.

While foraging is the most satisfying way to procure wild mushrooms, they are becoming increasingly available through farmers’ markets, online purveyors and gourmet stores. Some species that grow wild throughout North America such as oysters, maitake (hen of the woods) and lion’s mane are also grown commercially; these can be suitable for transitioning from buying to hunting.

Sam Fitz, owner of ANXO Cidery & Tasting Room, a neighborhood taproom in Washington, D.C., picked up mushrooming when COVID-19 hit, in part mentored by the restaurant’s wild food purveyor. Fitz started ANXO making hyperlocal ciders from crabapples foraged on bike rides through the nation’s capital, salvaging fruit that otherwise would go to waste. Today, the seasonally focused menu often features wild fungi and other foraged ingredients from savory tartelettes made with beech and hedgehog mushrooms to cocktails made from bitter boletes.

One of ANXO’s signature dishes is a vegan “chicken of the woods” sandwich, served hot, Nashville-style. This orange-colored tree mushroom, also known as sulphur shelf, has a taste, texture and color that so closely resembles chicken that many recipes use it as a meat substitute. “People are so blown away by its meaty texture they can’t believe they are being served mushrooms,” says Fitz.

When preparing mushrooms, “Forget what you know about cooking vegetables,” says Bone. “Also forget the notion that mushrooms are too delicate to take washing or high heat. Mushrooms are extremely hardy because of the chitin in their cell walls, a compound that is more like fingernails than the cellulose of plants. You can cook mushrooms twice and they will still retain their integrity.”

Because the amino acids in mushrooms respond to heat more like meat than vegetables, Bone suggests searing mushrooms on the grill or under the broiler. “A slice of maitake will cook beautifully on the grill,” she says.

When cooking a particular species for the first time, Bone recommends oven-roasting the mushrooms wrapped in parchment paper. “When you open up the parchment, you can really smell the mushroom. It’s a wonderful way to pick up subtle flavor differences and see how the mushroom handles,” she says.

Since fungi take on all sorts of shapes and sizes, Bergo suggests letting a mushroom’s morphology inform how to cook it. Lion’s mane, for example, has a texture that mimics crabmeat, so faux crab cakes make a fun dish that honors its form.

“Chefs tend to chop things up, but I prefer to cook many mushrooms whole, especially when they have interesting shapes,” says Bergo. One of the chef’s go-to preparations of oyster mushrooms is to toss large pieces in seasoned flour or brush them with mustard, then bake until crispy. “They turn into cool-looking, crispy croutons you can put on a salad or eat as a snack,” he says.